Rise up, New York Republicans: Democrats have already gone too far and are about to go further still 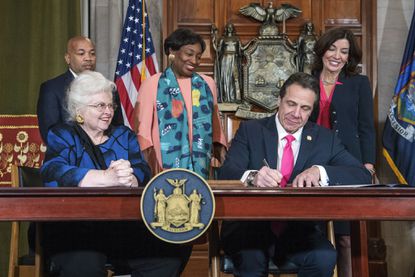 Read it here: https://www.nydailynews.com/opinion/ny-oped-rise-up-new-york-republicans-20190131-story.html?fbclid=IwAR1VvOPJIpN4J_rxZO84zjhH__7uRS_sGYX7RtiYoaPE8d-u2Esp8zOxD6U.
New York is a month into one-party rule and the Democrats have already outraged millions of New Yorkers by passing indefensible bills that were long stymied by Republican control of the state Senate.

Let this be a warning: If the Republican establishment doesn’t wake up, unify, organize and channel the outrage to its electoral advantage, total and permanent GOP irrelevance in this state is assured.

This absence of checks and balances will hurt every New Yorker. What’s happened so far?

Both houses of the Legislature have passed a bill that essentially makes abortion legal up until the moment of birth for virtually any reason. Gone are the requirements that a doctor perform the abortion and the requirement that the doctor treat an aborted baby born alive. The bill even takes away protections for the unborn in the penal law.

Not that long ago, the mainstream pro-choice position was abortion should be legal, safe and rare. Democrats have just ensured that abortions will be less safe and more common.

There is a lot of truth to the conventional wisdom that Republicans are being driven out of the suburbs. But Albany Democrats just handed Republicans an issue in the so-called Dream Act, tailor-made to drive Republican resurgence on Long Island and throughout the Hudson Valley, if the powers that be in the GOP act.

With the average student loan debt at $39,400, Democrats passed legislation to allow those in the country illegally to participate in the Tuition Assistance Program.

Illegal immigrants already get in-state tuition rates at SUNY and CUNY, but now they will get grants that don’t have to be paid back.

Note: In 2009, New York got rid of TAP for postgraduate students. It still hasn’t been restored.

The citizen or legal resident who wants to be a teacher, doctor, lawyer or CPA, for example, gets no help from New York State.

But as of last month, illegal immigrants will have millions of dollars from taxpayers per year to go to college. But wait, there’s more!

The Dream Fund portion of the bill sets up a taxpayer-subsidized not-for-profit that will raise private money for higher education-related expenses. Only those who have at least one parent who is an immigrant are eligible.

Up next is a total state takeover of health care, the Holy Grail of liberal policymakers. When the Democrats say single-payer, they mean it. The New York Health Act, a bill that’s immensely popular in both houses of the Legislature, would seek to replace all existing health insurance.

They are confident they will even be able to get permission to replace Medicare, Veterans Administration and other federally run health care programs.

The Democrats are not hiding the fact that under this legislation, if you like your doctor, you won’t be able to keep it. The same people who couldn’t deliver tax rebate checks in a timely manner are going to be the only show in town when it comes to delivering health-care coverage. The tax increases to institute single-payer will be epic.

Non-citizen voting, sanctuary state status, more spending, more taxes, more mandates, more regulation and a slew of other destructive policies are close to becoming reality. It is the responsibility of Republicans to stop this.

The time for grumbling, finger-pointing and waiting for some other leader or institution to step into the breach are over. The cavalry isn’t coming. Either we lick our wounds, begin to turn back the tide immediately or we all eventually get driven out of the state we love by the policies we hate.