Former Speaker of the House Newt Gingrich took to Twitter Wednesday night to sound the alarm about President Barack Obama’s latest move to further his executive order amnesty power grab and to urge Congress to stop Obama immediately.
Gingrich was apparently responding to reports that the Obama administration announced it is hiring 1000 new permanent employees and contractors at a new office to process applications for Obama’s recently announced executive order amnesty for up to five million illegal aliens. 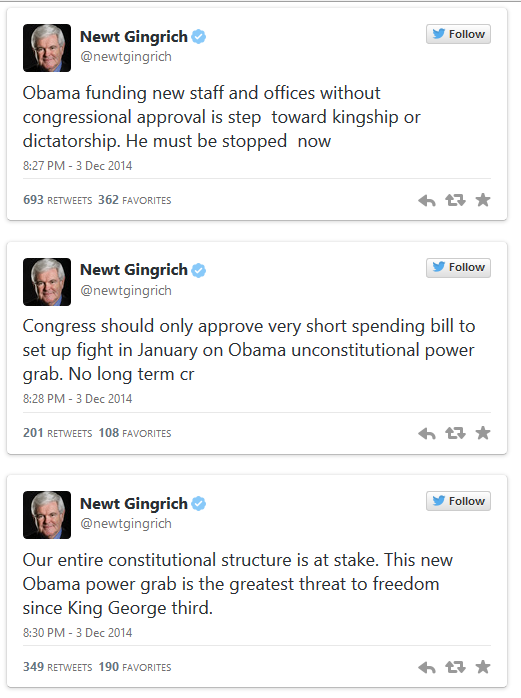 “Obama funding new staff and offices without congressional approval is step toward kingship or dictatorship. He must be stopped now”
“Congress should only approve very short spending bill to set up fight in January on Obama unconstitutional power grab. No long term cr”
“Our entire constitutional structure is at stake. This new Obama power grab is the greatest threat to freedom since King George third.”
‘No long term cr’ means no continuing resolution by Congress to fund the federal government through the end of the current fiscal year that ends September 30, 2015.
The Washington Times reported Wednesday on Obama’s latest move to enact his executive amnesty for illegal aliens:

“Department of Homeland Security officials wasted little time in ramping up for President Obama’s amnesty, posting 1,000 job openings the day after his announcement and announcing it already has space for hundreds of employees at a new location in Arlington, Virginia — an indication that it had laid its plans well before Mr. Obama’s announcement.
“And even though Mr. Obama said his policy is temporary, U.S. Citizenship and Immigration Services is hiring the employees for permanent positions, at salaries of up to $157,000 a year, according to the job postings listed on the official federal jobs website.
““USCIS is taking steps to open a new operational center in Crystal City, a neighborhood in Arlington, Virginia, to accommodate about 1,000 full-time, permanent federal and contract employees in a variety of positions and grade levels,” the agency said in an internal email to employees on Monday. “The initial workload will include cases filed as a result of the executive actions on immigration announced on Nov. 20, 2014.””

The Times quoted Sen. Jeff Sessions of Alabama reacting to the news:

“Sen. Jeff Sessions, an Alabama Republican who has taken the lead in fighting Mr. Obama’s policy, said the new facility in Virginia is “a clear symbol of the president’s defiance of the American people, their laws and their constitution.”
““He is hiring federal employees to carry out a directive that violates the laws Congress has passed in order to foist on the nation laws Congress has repeatedly refused to pass,” Mr. Sessions said in a statement.”

Obama’s amnesty is so far outside the bounds of law that the Washington Post denounced it in a House Editorial published Wednesday evening:
“THE WHITE House has defended President Obama’s unilateral decision to legalize the presence of nearly 4 million undocumented immigrants as consistent, even in scope, with the executive actions of previous presidents. In fact, it is increasingly clear that the sweeping magnitude of Mr. Obama’s order is unprecedented.
“…Republicans’ failure to address immigration also does not justify Mr. Obama’s massive unilateral act. Unlike Mr. Bush in 1990, whose much more modest order was in step with legislation recently and subsequently enacted by Congress, Mr. Obama’s move flies in the face of congressional intent — no matter how indefensible that intent looks.”