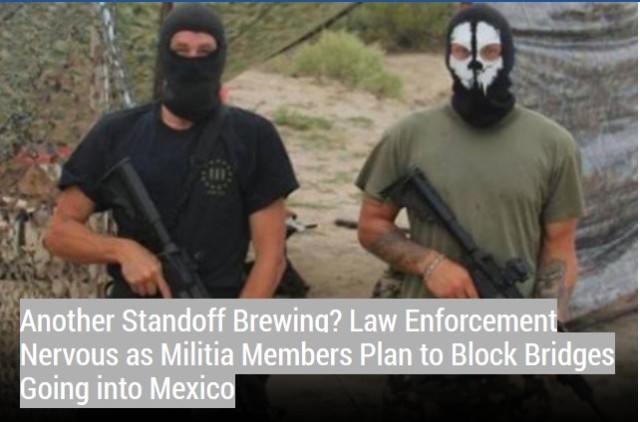 (TPNN) – Law enforcement officials in Texas are preparing for what might end up as a stand-off between militia members and law enforcement agents as militia members are planning a demonstration that would block-off bridges that span between the U.S. and Mexico.
On September 20th, militia members are reportedly threatening to stage a protest against illegal immigration by blocking-off pathways between the two nations that span across the Rio Grande River.
KRGV in Texas reports:
FAX BLAST SPECIAL: NO AMNESTY for Illegals!

Officials say they received word that members of a militia are threatening to block ports of entry.
In Starr County, international bridge authorities met with Customs and Border Protection officials Thursday. Their goal was to discuss the potential problem and find a plan of action.
Starr County has international bridges in Rio Grande City, Roma and Falcon Dam.
Officials received word that members of a militia plan to protest illegal crossings by blocking traffic on Sept. 20.
Rio Grande City Mayor Ruben Villarreal said members of the group have a right to express their opinion. His is concerned about the group’s intent, though.
“What can we expect? I don’t know. The unknown becomes an issue that we really got to prepare for,” Villarreal said.
“I’m a 100 percent sure that with the National Guard, with DPS, with Border Patrol and local law enforcement, we’ll communicate and we’ll handle whatever comes,” he said.
“The level of communication that exists doesn’t get talked about enough. It’s an extraordinary amount of communication,” Villarreal said.
Villarreal said he is worried about safety.
“If they’re here to block traffic, to be a hindrance between traffic and the port of entry, that causes a problem. It’s a huge safety issue,” Villarreal said…
Villarreal said he is concerned about possible violence.
“I know that the state of Texas provides for them to be able to display their firearms,” he said.
“I’m not going to lie to you; it’s going to make us nervous. We’re not used to seeing firearms being openly displayed,” he said.
Villarreal said even though they’re not familiar with the militia, they plan to be prepared.
“We’ve never dealt with militia here in Starr County. We don’t know what their temperament is or their personality might be. I can tell you that knowing that they might be here … helps us prepare for what ever may come,” he said.

It’s certainly understandable that law enforcement officials are nervous about the upcoming event. However, with the standoff at the Bundy Ranch fresh in the minds of Americans, it’s clear that police must be mindful of the line between maintaining law and order and engaging in police intimidation by demonstrating a frightening overreaction by militarized police against citizens demonstrating their First and Second Amendment rights- as we saw in the standoff between citizens and the law enforcement officials at the Bundy Ranch several months ago.