Frustration! That’s my reaction to the first two days of oral argument before the Supreme Court in the anti-Obamacare case.

All parties arguing before the Court were in agreement on one thing: that Wickard v. Filburn is good law. That’s right, both sides begin their analysis with the assumption that Wickard is a valid interpretation of the commerce clause.

Liberty Legal Foundation has been warning you about this since the beginning. I was still hoping for a pleasant surprise. I was hoping that one of the lawyers arguing against Obamacare would make some statement that Wickard leaves no limits on Congressional authority. But it didn’t happen.

Before you think that such an absurd argument could never work, remember the Wickard standard: A farmer growing wheat on his own land for use by his own family on his own farm is interstate commerce because if many other farmers did the same thing it would reduce demand on the interstate wheat market. This logic is as twisted as the new absurdity: making a decision to not act, is activity. Never underestimate the ability of power-hungry men to twist logic.

The danger here is that the Court will go along with this activity/non-activity test. Such a test will leave no real limits on Congress. Even if the Court rejects the government’s current argument that making a decision is an activity, the government will find another way to describe non-activity as activity. In other words, even if the Court strikes down the individual mandate, if they do it for the wrong reasons we will see the individual mandate back again under another name.

For 160 years the limited and enumerated powers granted to the Federal government in the Constitution acted as a control against power-hungry and corrupt men. For 160 years the growth of the federal government and federal spending mirrored the growth of the American population (see chart in the side bar). In 1942 Wickard removed the Constitutional limits on federal power. Since Wickard every aspect of the federal government has grown exponentially, and completely unchecked. Now the Supreme Court has an opportunity to fix its 70 year old mistake.

So, I’m frustrated that the attorneys arguing against Obamacare this week utterly failed to make the right argument. They’re offering the Court an easy out. The Court will likely take it.

When that happens Liberty Legal Foundation will pick up where they left off and make the right argument. We will be ready to keep fighting our Obamacare Class Action lawsuit after the Supreme Court rules. If the Court leaves the Wickard standard, with a BandAid, Liberty Legal will give the Supreme Court another opportunity to correct its mistake. This time the true solution will be presented.

We need your help to continue our fight. Please continue to spread the word about Liberty Legal Foundation. Please give what you can.

The massive growth in government regulations was well underway before the individual mandate. 94% of all Federal regulations came into being between 1942 (Wickard ruling) and 2010 when Obamacare passed. 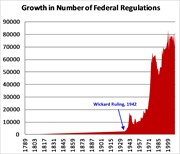 The most stunning thing about yesterday’s oral argument was the comments by Justice Breyer proving that he believes in essentially unfettered federal power. Breyer repeatedly asserted a hypothetical situation: if 50 million Americans were in danger of contracting some disease, but only 10 million of them would actually get the disease, does the federal government have authority to compel all 50 million Americans to get an inoculation? Breyer asserted that the federal government clearly could order such inoculations. He was surprised when one attorney contradicted him on this point.
So, to be clear, Justice Breyer believes that the federal government cannot prevent a woman from killing her unborn child because that would be an infringement on the woman’s right to privacy. But it would not be an invasion of any personal rights to force 50 million Americans to have a foreign substance injected into their bodies against their will.
Such logic would also support forcing certain Americans to get identifying tattoos on their arms and wearing gold stars on their clothes. After all, it’s for the public good, right? According to Breyer, that appears to be the only test for Constitutionality.