Andrew Breitbart’s Postcard to Our Troops

Andrew Breitbart’s Postcard to Our Troops.

Andrew Breitbart’s Postcard to Our Troops 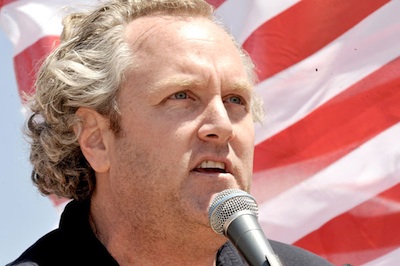 It’s been a tough few days for all of us. The sudden loss of Andrew Breitbart has left us devastated.

I must confess in all of remembrances, great stories about his life, as well as feeling shock and more than a bit of disbelief [at first] I never really broke down until today.

I never had the privilege of meeting Breitbart, but I admired him greatly. I loved his take no prisoners attitude, and wish I had the kind of grace he showed while doing it. I’ve never had a hard time arguing, but it’s the way he did it all that was so remarkable. He would say that he hated the enemies of Liberty and Freedom to his very core, but he never came off as mean-spirited. It’s a quality I really admired in him.

Another quality Breitbart had was the ability to inspire. He was the kind of leader you wanted to look up to and follow their lead. A remarkable man of the sort who we rarely see and will forever miss.

As I was saying, his death shocked and saddened me, but the full impact of what we have lost didn’t really hit me until today when a copy of postcard tweeted by “Hating Breitbart” came through my Twitter feed. This accounts belongs to a movie of the same name.

“Hating Breitbart” tells the story of how one man with a website upended the traditional press and repeatedly found himself the target of a media feeding frenzy.

I’ll have more in another post about all of that.

The postcard, which comes to us courtesy of Beverly Perlson who runs the website Band of Mothers is addressed simply “Dear Soldier.”:

Dissent is NOT patriotic!

I apologize from the bottom of my heart for the putrid behavior of the American media. You have exhibited heroism while they took the lowest road.

I have committed all of my resources to undo that lowering. History will prove you right. And the mainstream media and Hollywood will have been exposed as the traitors they are.

When I read this, I lost it.

What you see here is a man with real passion and a strong sense of right and wrong. Breitbart saw great injustice, then looked around and saw no one was really doing much about it. He took up the fight himself and fought with everything he had.

He saw how the media, Hollywood, and the left in general, treated our finest and bravest, and he took it personal. Breitbart was the warrior who looked around at all of the hate spewed from the vilest elements of our society, and said “not on my watch!”

Andrew Breitbart was a marketing genius, and the true king of all Conservative media. He was intelligent and motivated. He could have easily taken the another path, become wealthy and admired by the usual suspects. After all, he grew up around Hollywood and had worked in the business.

He didn’t do this. Instead he decided to take on the corrupt media and the Hollywood elite. He took them on with everything he had, and inspired others to do the same. And he was winning.

Andrew Breitbart had courage and the heart of a warrior. There is now a void that may never be fully filled.

Reading the note to our troops and seeing the passion Breitbart had for his work, I have come to fully understand the magnitude of the loss our nation has suffered and what a magnificent man Andrew Breitbart was.

May God bless his soul and may we all be continually inspired by the life and works of Andrew Breitbart.

via Andrew Breitbart’s Postcard to Our Troops.