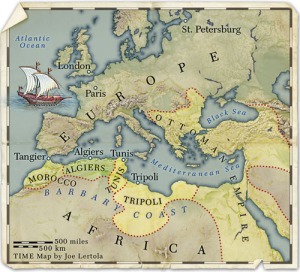 WHILE READING about things totally unrelated to the counterjihad movement, I have occasionally come across some interesting historical facts about Islam. I was surprised to discover that Islam had a hand in many important historical events I already knew about without ever knowing Islam had anything to do with them. Here are a few of the most interesting:

1.The creation of the U.S. Marine Corps was initiated in response to Islamic warriors. The Barbary Coast pirates were following in Mohammad’s footsteps, raiding caravans (in this case, oceangoing ships), taking slaves, capturing people to hold for ransom, and demanding “protection money” from any kafirs who didn’t want to be raided. This had been going on for centuries along the North African Mediterranean coastline.

Any ships that wanted to do business in the Mediterranean were at risk. Many European countries did the easy thing and paid the protection money to the Muslims to avoid being raided, which, of course, helped fund their operations against anyone who wasn’t paying. The U.S. did not have enough military resources to protect its ships, so it paid the protection money too. This bothered Thomas Jefferson. Before he was president, when he was an ambassador to France, Jefferson had a chance to meet with an ambassador from Tripoli, and he asked why Tripoli did this. The Muslim explained it was written in the Koran.

So Thomas Jefferson did something every leader of the free world should do: He bought himself a Koran and read it. Then when he became president, he knew what he needed to do: He formed the United States Navy, created the Marine Corps, and sent them to the shores of Tripoli, where they soundly defeated the Muslim warriors.

This was the first foreign war fought by the United States. America’s victory was the beginning of the end of the “Barbary Coast Pirates.” The military aggressiveness of Islamic countries remained contained and weakened for over a century.

Read more about that here: Why Did President Jefferson Read the Quran?

During the Second Jihad, Islam invaded Central Asia and defeated Constantinople in 1453, cutting off the overland route for Europeans. Islamic armies continued their jihad northward, and conquered much of what is now Eastern Europe, until they were finally stopped at the gates of Vienna in 1683. Read more: The Second Major Wave of Jihad: the Turks, 1071-1683.

Europe had been trading with the Far East for centuries, and their old overland route now went through territory that was hostile and dangerous to anybody but Muslims. The economy of Europe was threatened.

So, in 1492, the year Islam was finally defeated in Spain, ending Islam’s 780-year occupation, Columbus set off to find a passage to the Far East by boldly sailing West into the unknown. Desperate times call for desperate measures.

3. The .45 caliber 1911 semiautomatic pistol was created to stop Islamic warriors. From 1902 until 1913, the United States fought a war with the “Moro Warriors” in the Philippines. These Islamic warriors were named “Moros” by the Spanish. Their unstoppability was legendary. “In one instance,” writes Robert Boatman, “a Moro warrior received 14 bullet wounds in five minutes, three of which penetrated his brain, and yet he fought on.”

At the time the army was using .38 caliber guns, which were unable to stop the Moros, so in 1906, they began testing different guns to find something better. In 1911, they chose the .45 caliber semiautomatic pistol. It had enough stopping power to kill even a Moro warrior with one shot. Read more about this interesting piece of history here, here and here.

4. The Great Pyramid of Giza looks unfinished because of Muslims. The pyramid was once covered by a smooth, beautifully polished layer of white stone. This outer layer was removed by Muslims, who used the white stone for mosques and palaces, leaving the ancient pyramids with their somewhat unfinished appearance.

The physicist, John Zajac, wrote: “This protective covering was made up of…hard, white limestone, similar to marble but superior in hardness and in durability against the elements…The casing stones, 144,000 in all, were so brilliant that they could literally be seen from the mountains of Israel hundreds of miles away…The people of the area had viewed the pyramid and its polished stones with awe for centuries. But when a 13th century earthquake loosened some of these casing stones, the Arabs recognized a great quarry of precut stones that could be used to finish off palaces and mosques. For instance, the casing stones were used to rebuild the new city of El Kaherah plus Cairo mosques and palaces, including the Mosque of Sultan Hasan.”

Historically, this is Islamic standard operating procedure. Wherever Islam established itself throughout the world, it destroyed or defaced monuments that represented the previous (conquered) culture and replaced it with Islamic structures and mosques. Afghanistan used to be Buddhist. Turkey used to be Christian. Pakistan used to be Hindu. The former cultures and any symbols of them were annihilated and replaced by Islam.

5. The Crusades were a limp, late, defensive response to four hundred years of Islamic war against what was then largely Christian lands (the Middle East, Northern Africa, and Europe). Four of the five main centers of Christianity, including the Byzantium and Constantiople, were eventually conquered by the Islamic warriors’ relentless conquests, and the countries were forcibly converted into Islamic states. But before the Crusades, Byzantium was still fighting to defend itself, and repeatedly appealed to Rome for help.

The different nations of Europe were largely competitors with each other. They were not a united force — far from it — but the Pope thought he could unify Europeans if he made it a matter of “defending Christians,” so that’s how he made his appeal. It helped unite Europeans against a common threat, and it may have saved Europe from the forcible Islamization suffered by the nations of the Middle East, part of India, and North Africa. Read more: What About the Crusades?

Here’s another interesting historical tidbit about Islam’s influence: The defense of Europe during the Crusades was devastatingly expensive, and the Church of Rome tried many ways to raise funds. Some of these fundraising efforts were deeply offensive to Martin Luther, so he intitiated the Protestant Reformation.

Islam has had a profound impact on important historical events throughout its history, and it is still being felt today.