“The Arabs Have a Different Concept of Compromise,” he warned…

With the looming threat of acquiescence by the UN General Assembly in September in the Palestinian Authority’s quest for recognition of an independent state with the pre-1967 borders, it’s hardly surprising that Israel is contemplating pre-emptive unilateral action – perhaps the annexation of the West Bank “settlement blocs”.

Of those borders as they were at the start of the Six Day War, a prominent Israeli politician has said:

“Most Israelis will tell you that these are deadly lines, very difficult to defend. These would bring back the horrors of pre-1967 Israel.”

He added: “I believe the Arabs understand that as long as Israel is strong they will have to reach some type of modus vivendi with us.

In other words, so long as Israel is not pushed back to her 1967 borders there is no way to get rid of Israel. This explains the vehemence with which the Syrians and others want Israel to return to the 1967 lines. They want this not to live in peace with Israel but to recreate the situation that existed before 1967 and reverse the course of history. The weakness that Israel would project to the Arab world would be such that … instability would be invited.

…. We must be able to defend ourselves and the ability to guarantee our defense has much to do with not returning to the 1967 lines. The Arabs realize this. It is essential that we find a solution that does not lead us to these old lines.”

The following video shows just how vulnerable Israel would be if it returned to the situation prior to the Six Day War, given the jihadist threat, and spells out Israel’s essential security requirements:

The politician I’m quoting warned that the Arabs:

“make no distinction between Ariel, Efrat, Ma’ale Adummim and Jerusalem. This is a very interesting ﻿Jewish debate but is irrelevant when dealing with the Arabs. They want all the land…. All the Jewish towns and villages that have Jewish inhabitants should be uprooted and the Jews expelled…. First they want us out of Judea, Samaria, the Golan Heights and Jerusalem. Perhaps after that they have other things in mind….

The problem really has a lot to do with the difference in perceptions between the Arab and Western concepts of conflict resolution. According to the Western concept, if you and I have a conflict over a house, a car, money or any type of transaction and we cannot work out an arrangement where we are both completely happy we sit down and compromise. I will not get everything I want and neither will you. W keep bargaining until we reach an arrangement that is mutually satisfactory.

The Arabs have a different concept of compromise. Let us say that we have a dispute about something. My solution [if I were an Arab] is not to compromise but to wait a year, a decade, or a century. Perhaps not my time or my son’s time or his son’s time. I will not compromise but simply wait you out. [He gave as an example President Assad’s remark that “I am not worried about the Golan Heights. I will not get it now but in 25 years I will get it.”]

If we ever reach the stage where the Arabs believe they need to compromise we will make some progress.”

An interesting observation in light of the poll of Palestinians taken late last year, which indicated that a majority envisage a two-state solution as the precursor to the disappearance of Israel and a single Arab state in Israel’s place. See http://daphneanson.blogspot.com/2010/09/from-river-to-sea-public-opinion-in.html and http://daphneanson.blogspot.com/2010/11/still-crazy-after-all-these-years.html

Note the map on the wall behind Mahmoud Abbas. It surely symbolises “the writing on the wall”. For it depicts Palestine as he wishes, indeed how he apparently ultimately intends, it to be:

Here’s Abbas with another map of his future state:

And here he is with a stone model of it: 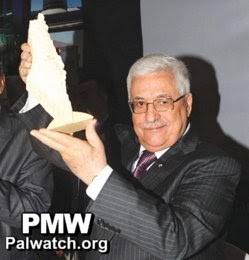 These children are well-prepared for what he has in mind for their inheritance :

The Israeli politician whom I’ve been quoting is Dan Meridor, once touted as a possible prime minister, speaking in Jerusalem to interviewer Norman Frankel nineteen years ago. The entire interview appears in Middle East Focus: Canada’s Magazine on the Contemporary Middle East (vol. 14, no. 3, Summer/Fall 1992, pp. 14-18.

I reckon it’s still basically relevant to the situation today.