By Dennis Cauchon, USA TODAY
New Yorkers get more government aid per person from social programs than residents of any other state, a USA TODAY analysis finds.

The state’s Medicaid program is the most expensive in the nation, driving the average cost of all government benefits in New York to $9,442 per person.

New York ranks 28th in Social Security payments per person and 9th in Medicare benefits. But the spending on Medicaid, the health program for the poor, is far above that in any other state. Only Washington, D.C., spends more.

STORY: Americans depend more on federal aid than ever SORTABLE TABLE: State rankings for assistance

“New York has a social tradition, an ethic, if you will, of providing services to the entire population with a special welcoming attention to those at the bottom,” says James Tallon, a former legislative leader who heads the United Hospital Fund, a research group.

New York has unique challenges — a large number of poor people, often immigrants, and a high-cost of providing health care in New York City, he says.

The state’s relative affluence allows it to care for its poor. New York ranks in the middle of the pack in providing benefits to its residents when spending is measured as a percentage of the state’s income, the analysis found.

USA TODAY analyzed data from the Bureau of Economic Analysis and the Census Bureau to determine the importance of government benefits in each state. The benefit numbers represent average amounts received per person — not just for those in a program.

The benefits include what people receive for Social Security, Medicare, Medicaid, food stamps, veterans’ programs, college scholarships and many other government programs.

•West Virginia. The state gets 28% of its income from government programs, more than any other state. The state’s residents are the second oldest, after Florida’s, and 20% collect disability.

•Utah. Residents get the fewest dollars — $4,731 per person in 2010. The state, which has a young population, ranks low in dollars per person from Social Security, Medicare and Medicaid.

State rankings for assistance
Government paid a record amount in benefits to residents in 2010 for Social Security, Medicare, Medicaid, food stamps and other programs. How the states rank in dollars received per person. (2000 dollars adjusted for inflation.) 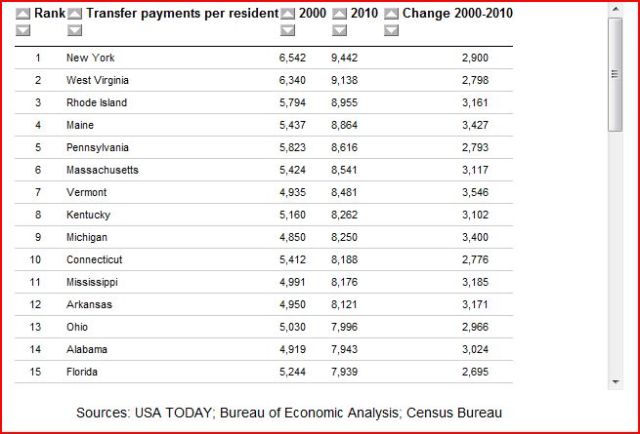