February 29, 2011
Tennessee has a bill in the legislature that tries of protect its citizens from jihad as legalized by Sharia law. The local paper has responded with the same tired argument–Islam is a religion and we are bigots to try to do anything about a religion. The usual suspects are interviewed, some Muslim leader and a liberal apologist who assure us that we are immoral by trying to protect ourselves from the violence of Islamic jihad.
Knowledge can teach us what is, but wisdom allows us to see what is not there. When you read the inaccurate articles published in the papers, there is something that is absent—knowledge about the subject at hand. Instead of facts about Islam, we get “expert” opinions from those who cannot even define Islam, which goes a long way to explain why there are no facts, only viewpoints.

It is exceedingly simple. Islam is the doctrine found in the Koran, Sira (Mohammed’s biography) and the Hadith (his traditions). The Koran does not have enough information in it to be a Muslim. The bulk of Islamic doctrine is taken from the Sunna of Mohammed (found in the Sira and the Hadith). All of the Sharia is based on Koran, Sira and Hadith, the Trilogy.
And do we find even one reference to the Islamic doctrine in such opinion pieces that are found in the media? No, not one. The media can talk about jihad without ever referring once to the doctrine of jihad found in the Trilogy.
The odd fact about the Islamic doctrine is that most of it is not about how to be a Muslim, but instead, the majority of it is about the non-Muslim, the Kafir. For instance, 64% of the Koran deals with Kafirs, which is not religious in nature, since none of the Kafir doctrine can be about religion, since the Kafir is strictly excluded from any aspect of the religion of Islam. The Islamic doctrine about Kafirs is purely political, hence it is Political Islam. The long and short of it is: forget about the religion of Islam unless you are a Muslim. Keep your eye on Political Islam if you are a Kafir. 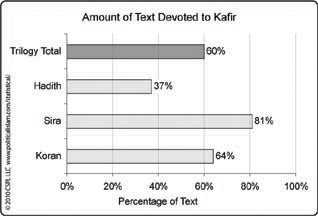 One of the ways Political Islam manifests is jihad. To show how extensive jihad is in the Trilogy, consider that 31% of the Trilogy deals with jihad. Jihad is not just a verse or two; it is a major part of the Islamic political doctrine. 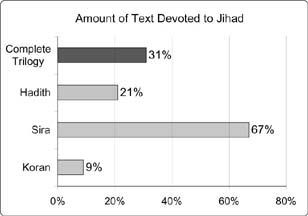 But our media shows us that they do not have any access to any expertise about Islam. There are no facts, just opinions. Fact-based reasoning does not deal with personal denigration of the opponent. Anyone who does not agree with the doctrine of ignorance as found in the media, the classroom and the pulpit is a bigot. Fact-based reasoning deals with the facts of the doctrine. However, our media “pundits” and apoligists are not able to even define Islam, much less hold a fact-based discussion.
Here is the rule: if there is no mention about the Trilogy of Koran, Sira and Hadith, then it is just another opinion and is not factual. Shouldn’t we demand that our reasoning be based on facts?