Even as Barack Obama was trying to convince everyone that he had become a committed centrist and business-friendly policy was his game, the second half of his speech was still laden with promises of more government intervention and control of business. 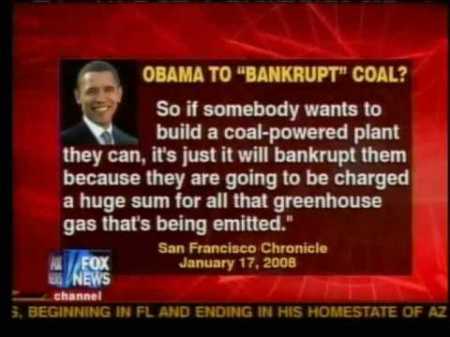 He speaks of pumping federal dollars into more ‘green’ technology, magically creating tens of thousands of jobs for happy American workers who will walk, bicycle or publicly transport to work singing ‘hi-ho, hi-ho’… or was that ‘The International’? By the way, did you know that the Green Party platform is the International Communist Manifesto in all but name?
While Obama is playing the centrist straw man, his Marxist minions over at the Department of the Interior and at the Environmental Protection Agency have taken up pillaging the nation right from where ‘centrist’ Obama left off. Another campaign promise to his nutcake base, Obama, unable to get cap and tax passed through the Congress even when he had overwhelming majorities in both the House and Senate, has unleashed the regulatory dogs from hell on the United States coal industry. He did say that’s what he was going to do in the campaign.
This country really does need to pay attention when these people speak. If you do enough talking, and the DeMarxists do a lot of it, you’ll tip your true hand sooner or later. All I know is he’s purposefully destroying the livelihoods of tens of thousands more Americans… and it’s all behind such a fraud. read more »