Seattle: In the Crosshairs of Islam

When it comes to the threat of Islam, far too many people only know of the threat of violent Muslims. That threat is very real, and will only get worse as more Muslims are allowed to come here. But there is an even bigger threat to America than violent Muslims. This threat is the lawful jihad which is being waged upon America. What makes it so dangerous is that Muslims are using the freedoms of America, to slowly takeover from within. This can clearly be seen in the November/December issue of Islamic Horizons Magazine.

The upcoming pages show us how Muslims move in, and then entire communities start to change to suit Islam. This can be seen across Europe as well. 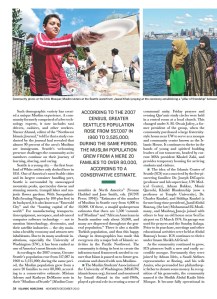 To view the rest of Islamic Horizons click HERE.

As many of us can see Muslims are on a non-stop mission trying to turn the United States of America, into the Islamic State of America and just like in Europe, the takeover is happening within the law. Our laws are not cut out to protect us from Islam, and if there are not some major changes in them we will eventually lose this war. Besides banning Sharia Law, we also need to end all Muslim immigration. To the readers who think that Islam could never takeover here, please remember that Muslims did not takeover the Middle East (outside of Israel), Afghanistan, Bangladesh, Indonesia, Malaysia, large portions of Africa and Europe, etc overnight. Complacency is not the answer, we must be more pro-active in this fight.